This page contains background and history of µSiM devices and posts to guide users in assembly and use of its latest version – the modular µSiM. The modular µSiM has been developed with the help of ALine, Inc. (http://www.alineinc.com).

The µSiM platform has been used by several laboratories across the world, primarily to study a variety of vascular barriers. The devices feature an ultra-thin, highly porous silicon membrane, ideal for co-culture studies and in situ analyses requiring excellent optical properties. There have been several versions of the µSiM, as discussed below. The latest, modular version is designed for rapid assembly, ease of use by any laboratory, and the ability to easily adapt the device based on the specific needs of the user.

First generation devices are made primarily of PDMS and are assembled layer-by layer using traditional bonding methods of UV ozone exposure and thermal incubation. The devices generally have a “Transwell”-style layout, with an open well architecture and a bottom channel separated by a porous membrane. However, µSiM devices have also been assembled in a microfluidic style with a top and bottom channel that can be connected to tubing for addition of fluid flow. Thus, the main benefit of the first generation µSiM is its diversity and adaptability to meet the needs of a particular laboratory. This generation of devices has been used to study osteomyelitis, vascular transmigration, and to develop models of the cerebrovascular and blood-brain barrier.

After teaming up with ALine, experts in microfluidic device production, the second generation of µSiM devices were developed. This generation was designed for mass production and high-throughput analysis, retaining the “Transwell”-style layout. Devices transitioned from PDMS to acrylic-based to avoid the concerns associated with PDMS, such as absorption of small hydrophobic molecules.  Devices were manufactured by ALine and shipped back to our laboratory for use or distribution. They feature a peel-off bottom layer to enable SEM imaging of the underside of the membrane. Thus far, this generation of devices has been used study osteomyelitis and to develop a novel in situ small molecule permeability assay on a microvascular mimetic.

Fig. 3. Example of third generation, modular µSiM devices. Top left: Core, “Transwell”-style, V1, layout. Top right: Increased channel volume, V2-style, for co-culture and ELISA, among other uses. Bottom: Proposed flow and TEER modules. Components are manufactured by ALine and assembly is done in-house. The modules will be designed by labs at UR and RIT.

The goal of the third generation µSiM is to combine the benefits of the first and second generations into a single platform. Thus, the modular µSiM was developed in collaboration with ALine for mass production, but features easy-to-use kits for assembly of devices by any laboratory and plug-and-play modules to adapt the device for the needs of the user. The modules are designed to fit into the device’s core “Transwell”-style architecture and will include a fluid flow system and transendothelial electrical resistance (TEER) measurements, among others. Assembly utilizes pressure sensitive adhesive (PSA) to irreversibly bond components together, and the bottom layer retains the peel-off feature from the second generation. With this format, laboratories can make the devices to suit their needs, including selection of the proper silicon membrane. These devices are described in greater detail in the links provided at the beginning of this page. 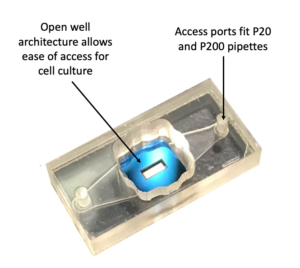 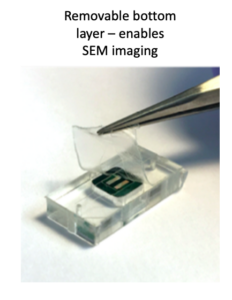